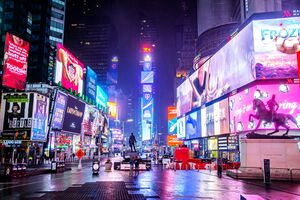 Often considered the heart of New York City, Times Square is at the junction of Broadway and Seventh Avenue. It's one of the world's busiest pedestrian areas and is also referred to as "the Crossroads of the World" and "the Center of the Universe." formerly Known As Longacre Square, was renamed in 1904 when the New York Times moved their headquarters to the newly erected Times building. It is the site of the annual New Year's Eve ball drop, a tradition began over 115 years ago, and it functions as a town square -- although technically it's shaped more like a bowtie.