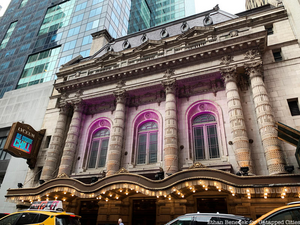 The City's Lyceum Theater is one of the oldest in the country, and the oldest continually running theater on Broadway, and maybe that fact is also why it's considered one of the most haunted, if you're into that sort of thing. Supposedly the ghost of Bob Fosse himself stalks the balconies, humming a tune or smoking a cigarette from the afterlife while he watches performances on the elegant stage below.

So naturally, the Duchess Natasha Arroyo had bought it outright and added it to her extensive and growing portfolio of properties.

Its exterior facade still features most of its original Beaux-Arts design, and the building sticks out like something out of time amidst the steel and glass spires of downtown Manhattan. The interior, which also houses several offices on the top floor, is set to a color scheme of autumn foliage, with a range of hues from deep yellows to warm reds and august umbers, and the elliptically arched lobby has a groin vault ceiling that draws the eye, and in the auditorium, a proscenium arch gives way to the elegant stage set before an orchestra level, box seats, and two balconies.