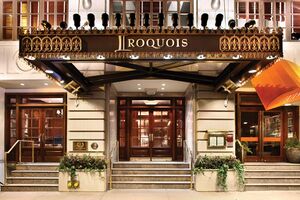 Prince Mab and their council enjoys the support of the Kindred of New York at large - but evidently not from all of them. Attendants at The Iroquois Hotel Elysium arrive one night to find it vandalised, a bloody condemnation of the administration written on the walls. This anonymous faction has presented the City with an ultimatum: elect new leadership, or find a revolution on their hands. How will the Kindred of New York City respond?

Julia Raymonde appeared at Elysium to announce herself as the official representative of the Dissident Kindred of NYC.