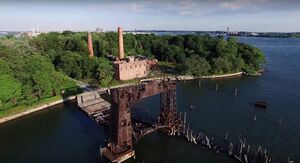 Owned by Natasha Arroyo, North Brother Island and the smaller South Brother Island sit near the tidal strait known as Hell Gate, a once-dangerous whirlpool which wrecked hundreds of ships and often deposited the wreckage on the island’s quiet shore. In the 1880s North Brother Island was chosen as the new home for Riverside Hospital, a quarantine hospital for New Yorkers with smallpox, tuberculosis and many more hideous illnesses. The hospital is long gone but ruins peaking out from the canopy of trees hint at a shocking story of mystery and woe.