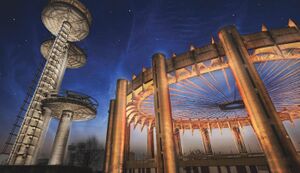 Consisting of three primary structures, the "Tent of Tomorrow", the Observation Towers, and the "Theaterama", the New York State Pavilion was, in addition to the two World's Fairs it was constructed for, home to countless TV and movie sets, including Men in Black and Iron Man 2 (Stark Expo). In the decades after the Fairs, it was neglected and abandoned, though it was briefly opened to the public for the 50th Anniversary in 2014, provided visitors signed waivers and wore hard hats. While restoration has been debated for years, no concrete plans have yet come together.