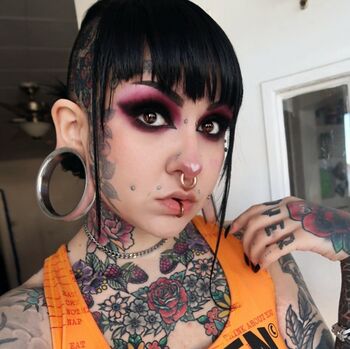 ✯The Merchent of Vice✯
What does your heart desire? Its a big questions and many people are too afraid to answer it. Well not Mr. Weeper, and she is ready and willing to help you answer it too. Legality is never a quandry that will stop Mr. Weeper, and only rarely does Morality step in either. If there is something you want, Mr. Weeper is the woman you need.

✯King of the Erinyes✯
The Erinyes are a gang of Sex Workers who killed their pimps and took over their turf. They run these streets now and Mr. Weeper is the King Bitch in charge around here. They are based out of a seedy little strip club in south Brooklyn called T&A and while it lacks the bells and whistles of the more legitmate clubs about the city, it certainly makes up for it with its enthusiasm.

✯Delusions of Grandure✯
Mr. Weeper has made it clear that they are moving up the social ladder, and she will push aside anyone who gets in her way. She may have suffered some set backs recently that are forcing her to rebuild now, but her eyes have never left sight of the goal and one day she is going to be on top of it all.

✯Mortal✯
Looking for a club that doesn't have a dress code? Want to sit down with a drink and blow off some steam? After a rough night at the club are you looking to get a bagle and hair of the dog? Get in trouble with the wrong ladies down in Brooklyn? Mr. Weeper could be your gal.

✯Crime✯
Looking to break the law to have a good night? Getting harassed at night by some overly agreesive men? Need to hire some protection? Looking to make big moves in the Gang world? Mr. Weeper might be able to arrange some help.

✯Ling✯
Do you have information on the comings and goings of the Courts? Are you looking to move up in the ranks and gain new Titles? Are you interested in getting involved with the Spring Court? Do you have knowledge about new dangers to the Freehold? Mr. Weeper would like to have a word with you.

Contacts
Logs
Allies and Other Faces