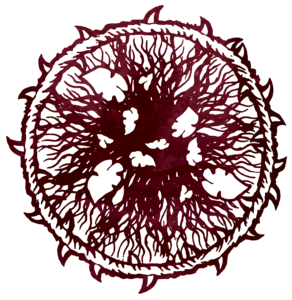 Interactions with the Danse:


Sea monsters, especially enchanting ones, find their way into many myths and folklore stories across the world, and sometimes, sometimes there are seeds of truth in those stories, or details, that allude to a Mara being at the heart of them. The Mara are considered a rare bloodline, but it's just as likely that the majority of their number choose to remain in the watery environments they've adapted to and forsake the land dwelling. Despite this rarity more than one covenant has managed to lure them into their folds, and there's even ancient books that speak of a branch of them being in the Circle of Crone and worshiping something called the Sunken Mother.

While what drives Mara is often highly individual, most are content to avoid the politics of kindred to the best of their ability, the ones who take to it (and don't find themselves in over their head), do so with ruthless, efficiency. After all, they've got more than a passing skill at swaying others.

They can be a valuable addition to cities that border water, and more than one Prince has made it lucrative for these specialized Gangrel to be on retainer for aquatic affairs as they arise.

Bloodline Bane:
Fish Out of Water: Just as life in water feels natural, easier some how, on the land everything is just slightly off, slightly harder, and they lose a level of 'again' when utilizing disciplines or devotions on land. (I.E. No 10-again)

Bloodline Gift:
Triton's Heir: All Mara are granted the Water's Grace devotion at no cost. They also often develop water applications of their other disciplines, such as Miasma manifesting a watery application. When the bloodline manifests, Mara develop an a certain otherworldly quality, this alien allure is represented by gaining the 9-again trait on intimidation and one other social skill of their choosing to best represent it's particular flavor of manifestation. Mara have adapted so well to life in water that using disciplines and devotions there comes easy, and they gain a level of 'again' (I.E. If they have None, they gain 10-again, if they have 10-again, it becomes 9again, if they have 9again, it becomes 8again.).

Bloodline Devotions: The Mara weave their disciplines into abilities that may well be the foundation for more than one myth or urban legend. Sirens? Drowned sailors?.....The Lochness Monster? The mermaid that gives a would be lover the ability to breathe underwater.

Many Gangrel are at home in the water, but none like the Mara. These aquatic vampires claim the waters as their home, not merely as some place to visit when necessary. As such, they are not only extremely comfortable in their chosen environment, they have adapted to it, making them deadly to trespassers.

This enhances Protean 2: Predatory Aspect by replacing the Aquatic change with the Water's Grace change.

This change has the following effects:

If this is the only aspect they are manifesting, they do not have to pay the Protean 2 vitae cost as their beast finds their aquatic changes as natural, if not more so, than their 'natural' form.

A Mara's voice can go beyond awe inspiring to become hypnotically alluring. With a mere musical whistle, a hum, or even lyricless vocals, the Mara entices their victim to approach and be transfixed - even if doing so could result in injury or even death. Many Mara have used this to lure targets away from groups, or lure sailors to steer their ships into reefs, or even jump overboard to swim A Mara can use this to affect a number of targets equal to their Blood Potency. The Mara makes a single roll, while each victim making a resistance check against the vampire's success. Targets who cannot hear the Mara are immune to this gift despite its supernatural origin.


Dramatic Failure: The target hears the unnaturalness of the Mara's song and dismisses its effect. The target cannot be affected by the Siren's Song for the rest of the night.


Failure: The target hears the song, noticing the singer, but otherwise acts as normal.


Success: The victim is ensorcelled by the Mara and answers the beckoning song. While enraptured with the Mara, the Mara achieves exceptional success on any roll against the target with three successes. The target does not get 10 again on any roll that works against the will of the Mara. Defying the Mara becomes a breaking point with a -2 penalty. The songs spell ends when the music does though this usually aligns with a successful feeding hunt.


Exceptional Success: With an exceptional success the spell isn't broken when the song ends, or even when feeding begins, it lasts a day per success, and more than one victim of a Siren has found themselves in her thrall even longer.


PC Clause: PCs are considered exceptional even if they are mere mortals, they are not the 'average' mortal, and thus they are afforded the ability to spend a WP and flee the Siren's Call. OOC collaboration should be initiated BEFORE attempting to leverage this power against a PC.


Effect: It’s not unheard of for the Mara to make bloated, drowned corpses of their meals, but every so often a mortal finds themselves the target of a different sort of kiss. With Kraken’s kiss, the Mara forgoes feeding from their target, and instead temporarily transforms them with the “kiss”. Giving the mortal the ability to breathe under water and to swim at their normal land speed. The Kraken’s kiss does not convey bliss, it does the opposite in fact, dealing the target a level of lethal damage as their body suddenly transforms to adapt to water.

If the target of this devotion is taken to the Mara's lair, as defined by "My Heart, My Lair", they will find their aquatic adaptions remain for as long as they're in the lair.

(This devotion requires the consent of the player of the target)

My Heart, My Lair


Effect: With this devotion the Mara declares an area as their territory, imbuing it with a resonance that they choose at the time of activating this devotion. For the duration of this devotion, Mara gain a bonus equal to the vitae committed when their hunting method aligns with their declared resonance. In addition, they may subtract the amount of vitae spent from their blood potency for determining what they can feed from.

The area must be at least partially aquatic, and contain some defining feature (A cove, a section of ocean with a submerged statue, a bit of coral reef, a half decayed boat at the bottom of a lake), and it is not unheard of for Mara to carefully sculpt their lairs to their tastes. (I've got gadgets and gizmos aplenty, I've got whosits and whatsits galore, You want thingamabobs? I got twenty....)

The lair effectively gains a haven and safe place rating equal to the vitae spent. Bodies of water are after all a precarious place to investigate.


Duration: 1 Day Per Success, if the roll is exceptional this becomes 1 week per success


Effect: The Mara's call is a powerful one, and with it she is able to beckon man and beast alike to action. With this devotion a Mara may inflict the enthralled condition on the target of her calling, but deflect it to another person or place creating a near unnatural level of loyalty.

If that place, coincides with their lair, as defined in the 'My Heart, My Lair' devotion, the subject gains a retainer rating equal to the vitae committed to their lair. If they should fail to upkeep the lair, the subject returns to a zealously enthralled mortal, and loses all retainer qualities. In addition if the enthralled condition is resolved, they likewise lose the enthralled retainer.

If the enthralled target is brought to the Mara's Lair, as defined by the devotion 'My Heart, My Lair', they will find that the enthrallment lasts for as long as they remain in the lair.

This Devotion can not be used on PC characters.

Condition: ENTHRALLED (PERSISTENT) You’re fanatically loyal to a vampire, willing to go to any length for him. You’ll happily take actions that threaten your own life ramming a speeding truck head-on, jumping in front of a gun-wielding psycho, or handing over your spouse and children for the vampire to play with. The compulsion lasts for one night for each dot of the vampire’s Blood Potency. You need to spend a point of Willpower just to take an action that goes against your master’s commands. Doing so is an immediate breaking point at Humanity 1. If you fail, you chicken out at the last minute; only if you succeed can you do something that the vampire doesn’t want you to do.


Resolution: You take serious harm (more lethal damage than your Stamina) when protecting the vampire, or you succeed at a breaking point roll related to the Condition.