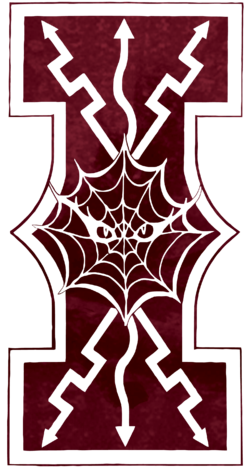 Interactions with the Danse: The Lynx are the youngest bloodline affiliated with the Invictus. Indeed, it is a mere matter of months since the first Kindred of this bloodline’s third generation manifested the line’s distinctive powers, thus confirming that the Lynx truly is a bloodline — and not merely the quirk of a bizarre vampire. As a result, not all Kindred who know of the Lynx know that they are truly a bloodline, and those Kindred who recognize the name are a select, but growing, group.

The Lynx themselves never refer to themselves as a bloodline, insisting that they are a blood web, instead. As the line does contain a handful of Kindred who are not direct descendants of the founder, Martin Thomas, there is even some justification for the claim, as the lines of relationship do not all flow straight down. However, that is true of many bloodlines, and most Kindred refer to the Lynx in the normal way, regarding their insistence on different terminology as merely one more manifestation of the bloodline’s obsession.

That obsession is networks. Martin Thomas was fascinated by networks, particularly communications and commercial networks, even before his Embrace. He managed to map the physical connections in his local telephone network and was working on a map showing the connections between all local businesses. There were lines showing who bought from whom, who owed money to whom and which businesses banded together to lobby for changes. The shape of the network convinced them that there was at least one player in the scene who had no public face at all. They were careful to make no direct inquiries, concentrating instead on building up a picture from indirect evidence, because the possibility that this player was an outfit of organized crime had occurred to him. All members of the bloodline share Thomas’ fascination with networks of all sorts (particularly electronic and commercial), although social and political networks have received more attention in recent years.

Most Lynx are members of the Invictus, primarily because that was the covenant Thomas joined after his Embrace, at his sire’s instructions, and he has never left. These Kindred quickly master the networks of loyalty within the covenant, and their mastery of modern technology (or, at least, the Internet) tends to make them valuable to more senior Kindred, giving them an edge when it comes to climbing the hierarchy. However, the bloodline’s philosophy does not tie the Lynx closely to the Invictus. Indeed, the Carthian philosophy is much closer to the Lynx’s interests, providing more opportunities for elaborate networks of loyalty that are not constrained by authority from above. As a result, the second-largest group in the bloodline are Carthians, a situation that is already generating some tension and will produce more if the bloodline grows. Members of the bloodline do join other covenants, but do so for personal reasons. There are, however, very few unaligned Lynx. The Lynx are natural joiners, as that embeds them in yet another network, and, therefore, few Lynx pass up the chance to join a covenant.

Nickname: Operators, Spiders, The Chained (themselves)

Bloodline Devotions: The power of the Lynx lies in their understanding of a vast chain of networks that links the entire world. The uninformed believe this Web of Devotions is its own Discipline, and the Lynx are happy to encourage such speculation. See The Chains is the first step to understanding connections; characters must purchase this power before they can access other Web powers.

Requires: Auspex 2
The Lynx makes metaphysical connections tangible. By targeting an individual or object (what Operators call a node), she can find hundreds or thousands of connections, and, with a little detective work, trace them, and pinpoint her victim’s place in a network, and the true nature of his intimate connections.

Requires: Majesty 2
The Lynx's understanding turns into action. Through force of will or small gestures that snowball into larger ones, the Lynx can modify probability networks and influence the infrastructure of an area.

Requires: Obfuscate 2
With this Devotion, the Lynx can spoof her relationship to a foreign network, or diminish her profile in a familiar one.

Requires: Auspex 2
A Lynx doesn’t have to know anything if someone else does. This Devotion allows the vampire to borrow data from the network, augmenting her own knowledge.

Requires: Auspex 3
The Lynx learns to create connections where there are none, though only on a smaller, intimate level. When crafting or upgrading an item, the Lynx can soak the object in his vitae. The finished item is a perfect symphony of the individual parts, creating a finished item where each part -- each joint or ball bearing or balancing weight or circuit -- is perfect for the role it plays.