Lodge of the Shield

The Lodge of the Shield

The Iron Masters move among the human herd, hunting their prey from the cover of anonymity. Is it any surprise, then, that many gravitate toward law enforcement careers? After all, a badge can get you into all sorts of places, and the police have access to information databases that make the hunt a hell of a lot easier. Idealistic Iron Masters even point to concepts like community policing as a perfect example of honoring their territory in all things.

The Lodge of the Shield serves as a support network for Uratha serving in law-enforcement. Originally it was just an informal “old-boys’ network” for the dozen or so Iron Masters in the LAPD back in the ‘50s, but it’s since spread to other local, state, and even federal agencies. Need to explain to your captain why you abandoned your patrol to go put down a Ridden killer? One of your brother officers will cover for you. Need backup that won’t question your “unorthodox tactics” like growling at a door till it opens? As long as you agree not to ask questions about that non-regulation knife with the bizarre runes Detective Kowalski carries, he’ll back your play.

Technically the lodge is open to werewolves of any tribe, but so far almost its entire membership are Red Wolf’s children. Since the late ‘80s, the lodge’s Wolf-Blooded membership has actually outnumbered its Uratha contingent, and the Lodge of the Shield is notable for the fact that Wolf-Blooded are permitted to hold positions outranking werewolf members.

Empathy 2 or Investigation 2 (If you can’t read a person or a crime scene, what good are you?) 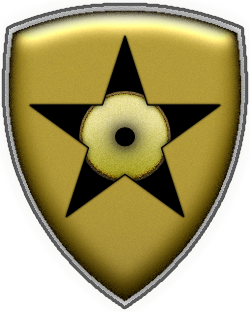 “The Shield that Stares” is a spirit that draws its strength from the enforcement of and submission to authority, along with impotent rebellion against confinement and resignation to it. Its appearance varies based on territory, resembling a proper badge of law enforcement for a given jurisdiction, though in each incarnation, an opening somewhere on the face of the badge will reveal a lidless, golden eye surrounded by darkness. Its appearance can also vary based on how well the local "shield-bearers" are honoring the Totem. Appearing rusty and scratched when starved and neglected, or burnished and shiny when gorged and honored. It urges its shield-bearers to answer slights against and corruption of the territory, its laws, masters, enforcers, and inhabitants.

Blessing: Get exceptional results on three successes instead of five when using Social Maneuvering to talk someone down from a fight or out of a rage.

Aspiration: To protect the Herd and the People from each other and themselves.

Ban: Must protect those in their custody until they are remanded to another’s care or judged by a proper authority.

The Lodge of the Shield’s Sacred Hunt grants your character the ability to wield law enforcement as another tool on the hunt. When interacting with an officer or agent of law enforcement, justice, or the imprisonment or punishment of criminals, they can spend Essence (if Uratha) or Willpower (if Wolf-Blooded) to shift the target's Impression of them by one step per point spent, and can do the same to shift the target's Impression of the hunt's prey in the other direction.