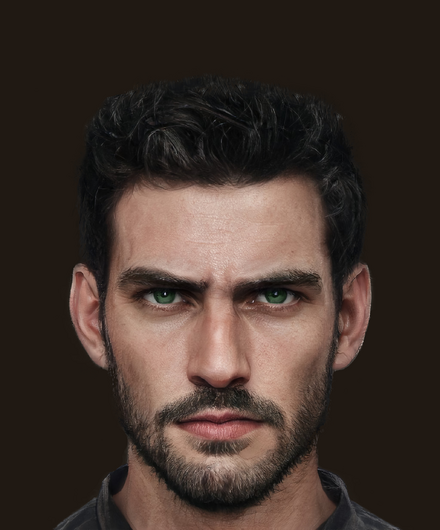 
“For those of us climbing to the top of the food chain, there can be no mercy. There is but one rule:
Hunt or be hunted.”
— Frank Underwood, House of Cards

Daniel Bosch was born a son of the moon, as they say, to a family that was in the know and helped him come to terms with his place among the People. He was always sharp, and socially intelligent, he was often captain of the sports team, even though he wasn't the most gifted athletically, he had a competitive drive that pushed his teams to excel. Abandoning sports as he grew up, he was encouraged to join up with the police force, where he could use his talents to help the People from within the bureaucracy of the herd. He was successful as a negotiator and still has friends on the force, but he never felt like the life of a beat cop, or even of a detective, was really his calling. Instead he pivoted into the sphere of public office, working closely with elected officials and getting acclimated and recognized by those in power. His real goal was to climb into higher offices himself, where he could really pull the levers.

To most, Daniel Bosch is mercurial, it's difficult for anyone without the full picture to get a good grip on him. He has his eye on advancing into office himself, and will support whoever he has to in order make that happen, his entire personality changing to fit the needs of the role and the audience. His eco-agenda is one of the few pillars of his political profile, but so far he's more concerned with getting into power than what, exactly, he would do with it when the time comes.

For the sons and daughters of the wolf and moon, he's relentlessly loyal and driven. Always on the lookout for his pack's interests, watching their backs, covering their tracks, and handling mortal affairs so they can focus on what they do best. He respects Uratha and wolf-blooded alike, and is keenly tapped into the mortal side of things, but recognizes that he is deeply out of his element when things slip into the other side of his life, never being much of a fighter or tapped in spiritually. Among his pack, he can let his guard down, often known to have a drink or six if the situation calls for it, and he prefers whiskey. The pack knows they can let their guard down around him as well, as he always turns a blind eye to their indiscretions, or helps with the cover up, but he does sometimes lecture or try to encourage them away from illicit activity, letting them know that he isn't all-powerful and they can still get caught or face other consequences despite his best efforts.

Daniel always carries a bit of a feral air to him, his thick hair and beard barely tamed but constantly trimmed and shaped for appearance's sake. He's in good shape and pretty athletic but no body builder or gymnast. His bright green eyes stand out against his warm complexion and dark hair. Overall he possesses a rugged, commanding aesthetic, he could play a grizzled sergeant in a war movie as easily as a general. In addition his presence can be somewhat intoxicating for anyone in close proximity, the sandalwood tones only growing more complex and invigorating with exertion.

Style-wise, he wears nicer suits than he should be able to afford, sometimes replacing the jacket with a leather coat of black or brown when he wants to appear more down to earth. He cycles through grey, black, and brown suits and coordinates colors in his dress shirts that are pleasant in contrast without being loud. For him, dressing down is a matter of doffing his jacket and rolling up his sleeves.

Daniel Bosch spent 11 years with the NYPD, the latter 6 of those as a negotiator in the Hostage Negotiation Team (HNT), working with the ESU (NYPD's SWAT) extensively. He had a reputation for being able to talk down anyone when he was called in. He's left the force for government work now, but he still gives lectures. Are you current or former NYPD? Maybe you've worked with him before. He's good for a drink and a consultation, and he's happy to keep in touch with old colleagues.

Back the Blue? (Law Enforcement/ST):

The police union is a big influence on local politics, getting into their good graces is high on Daniel's Agenda, as he'll need their support to get into office himself.

There are items coming down the legislative pipeline, still whispered in hushed tones behind closed doors, but Danny has heard about them, and he knows they'll spell disaster for the Uratha's territory and goals. He's got to figure out how to kill this in the cradle, before it gets out of his hands.

Carving your own Ladder (ST):

A seemingly inevitable part of climbing the political ladder is stepping on a few necks in the process. Daniel knows who he needs to use as political kindling, the question is how, and when.