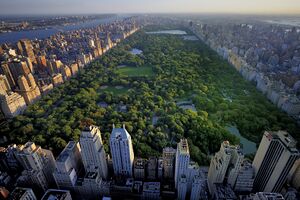 Central Park is an urban park nestled in between the Upper East and Upper West side, over 840 acres of protected parkland right at the heart of bustling Manhattan. It is the most-filmed location in the world.

Main attractions include landscapes such as the Ramble and Lake, Hallett Nature Sanctuary, the Jacqueline Kennedy Onassis Reservoir, and Sheep Meadow; amusement attractions such as Wollman Rink, Central Park Carousel, and the Central Park Zoo; formal spaces such as the Central Park Mall and Bethesda Terrace; and the Delacorte Theater. The biologically diverse ecosystem has several hundred species of flora and fauna. Recreational activities include carriage-horse and bicycle tours, bicycling, sports facilities, and concerts and events such as Shakespeare in the Park.