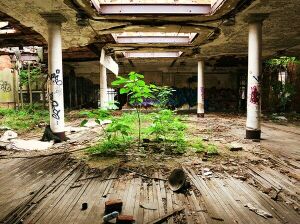 At closed-down P.S. 186, half the auditorium has been crushed by the caved-in ceiling and there are pigeon corpses and trees in nearly every classroom. Here, the concern is not the graduation rate, but the multi-story collapse in the east wing and the squatters in the basement. This school is far beyond failing DOE standards: its literal foundation is crumbling underneath its crumbling structure. In 1975, the 72-year-old school was finally closed down after it was discovered that the fire alarm system had been cut.