These aren't exactly rules; they're more like guidelines to provide a framework everyone can mutually understand and operate off of. If you'd like to manage posting order in a different way, communicate with the other players in your scene and get a co-sign from all those involved.

How To RP at Dark City 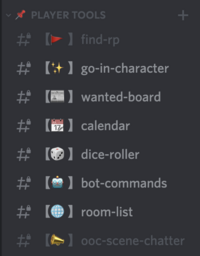 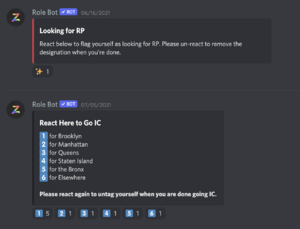 Playing In A Scene

Sammy set down the pie in front of Dean and waited for a thank you that he knew wasn't coming. They'd only had Boston Creme Pie at the corner store instead of Dean's preferred cherry, but it was better than coming back empty handed.

"What this?" Dean asked.

"It's pie, Dean. You're welcome." Sam sighed and pulled his own salad out of the bag, setting it down on the table in front of him.

"This? This is not pie..." Dean began, pointing towards the confection with contempt. "This is a horror story with whipped cream!"

Speaking OOC or Out Of Character

Some scenes will be private and require a room of their own. For this, head to the PLAYER TOOLS section and go to BOT-COMMANDS.

Please note, you may only use this system once you have been approved and given the @Approved role.

If you send too many commands too quickly you'll knock this bot off line. Please make sure you read the commands and use them properly. Only the person who creates the channel can add or remove players, and delete the channel (aside from Staff).

Please delete rooms once your scene has ended. If you need a permanent private room, open a ticket to discuss with staff.

Read our guide on Crossover for full details. Short story: it's allowed, but within parameters that retain the secrets and mysteries of each splat.

A strict post order is generally the default, though it can slow down larger scenes.

To alleviate this, if all participants are okay with it, consider using the three post rule (or 3PR), in which players may post again after three people have posted since they have.

Occasional quick interjections, like a single sentence, outside of the post order are generally OK, especially if you're responding to something said directly to or in reference to your character, returning a handshake, or something like that.

In general, this is to be avoided. There are some instances in which you are playing a scene with someone with whom you have great rapport, and a little sidebar or context can add depth or humor or something else that all the participants can enjoy, but what you should absolutely not do is use thought-posting as a way to establish dispositions that other player characters cannot respond to.

"John thought to himself what a stupid maggot Devin was." doesn't give the player of Devin an opportunity to respond, and it's generally considered passive-aggressive, rude, and self-centric to post this way. As mentioned, while thought-posting is not completely banned, you should use your discretion, and if someone asks you not to do it, or you find yourself making statements about other characters via thought posting and denying them the opportunity to respond, then stop. It is usually just an unpleasant experience for others.

It happens, stuff comes up! Throw a quick ((skip me for now, afk)) into OOC to let the other participants know to work around you for the time being. Try to give an estimate of how long you'll be.

If it's someone's turn and they haven't posted within 10 minutes, it's OK to skip them.

Even if a scene is in a public place and only has a couple of people in it, it's polite to ask if people are game for another person before joining. Sometimes people are in the middle of a specific, unplanned conversation they want to finish before getting interrupted. Sometimes both the parties involved are about to leave, so they may want to save you the trouble (or insulted feeling) of joining just to have them immediately stop RPing. In general, checking first can make everyone feel more comfortable, but we encourage people to ask to join ongoing scenes when they're interested! Don't feel bad for asking.

If someone asks to join a scene and you want them to hold off, think about whether you're ready to have them join after one more round of poses, or if it will be longer than that. If it's longer than that, we encourage you to just turn them down politely, rather than asking people to wait for what might end up being a much longer time than you expect.

Open scenes usually have a maximum number of participants indicated by the person who set the scene. If it doesn't, and there are already 5 people in the scene, ask if everyone is okay with another joining, and don't take it personally if someone isn't. Sometimes scenes can be overwhelming beyond about 4 or 5.

Until your first pose in a scene, your character isn't actually present and can't hear anything that was said, even if it was said in the pose right before yours. This can be waived with the permission of the other people in the scene, especially in cases where it might provide comedic effect or add to the story, but we encourage people to ask first. If anyone in the scene hasn't okayed it, don't do it.

It's usually assumed a scene is happening on the present day, at close to the present time in New York City.

While participants can agree to have a scene outside the current time and date, it's preferred that you do this judiciously to avoid situations that make something you already did in the future relative to your "past scene" impossible because of something that happened there.

Players can ask other players for dice rolls to see if they notice something, like your character slipping something into their pocket, or that they're holding something back in an answer.

Our Storytellers work hard to keep scenes moving as efficiently as possible so that you can get as much quality playtime as you can out of a scene. To help them do that, please abide by the following guidances: